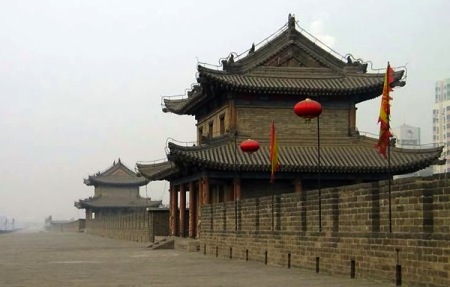 So what is the significance of Four Gates? It is the name of an acupuncture point prescription, a pair of acupuncture points that encourage the free-flow of Qi (i.e. promote good circulation), regulate the Liver and help undo the effects of stress on the body. These acupoints are used alone or in combination, almost daily in my acupuncture clinic – I like people to leave their session feeling relaxed.

But the Four Gates has other meanings. The novelist Doris Lessing used the picture of a four-gated city to embody harmony, reconciliation and integration; a new Utopia rooted in the body as well as in the mind, in the unconscious as well as the conscious. Similarly, Western medicine is now recognizing a core premise of Eastern medicine, the interconnection of mind and body.

The Four Gates Pagoda is the oldest standing stone pagoda in China, built with four identical sides, each facing one of the four cardinal directions (North, East, South and West), with a gate in the centre of each wall. The same structure can be seen in ancient Chinese city walls, which tended to be rectangular, with well-fortified gates to defend the city from attack. Chinese medicine emphasizes strengthening the immune system so the body can defend itself from illness.

The Four Gates appear in many spiritual traditions. The Buddhist spiritual text, the Yoga Vasistha, describes four gates to freedom and enlightenment: tranquility, contentment, good company and inquiry. This is reflected in the design of the mandala, in which a square with four gates encloses a circle with a centre point. Jewish tradition also makes mention of four gates which must be mastered – the gate of seeing, the gate of listening, the gate of imagining, and the gate of speaking. And from the Sufi tradition, we are advised to speak only after our words have passed through the four gates of speech, ensuring they are true, necessary, beneficial and kind.

On a secular note, the Four Gates is also a small winery, in Santa Cruz, California, with wines that are “elegant, with great structure, well-integrated tannins and loaded with fresh fruit”. All things in moderation!

This blog will help make Chinese medicine accessible to everyone - deconstructing the wisdom found in classical Chinese medical texts into strategies for healthier living...read more →